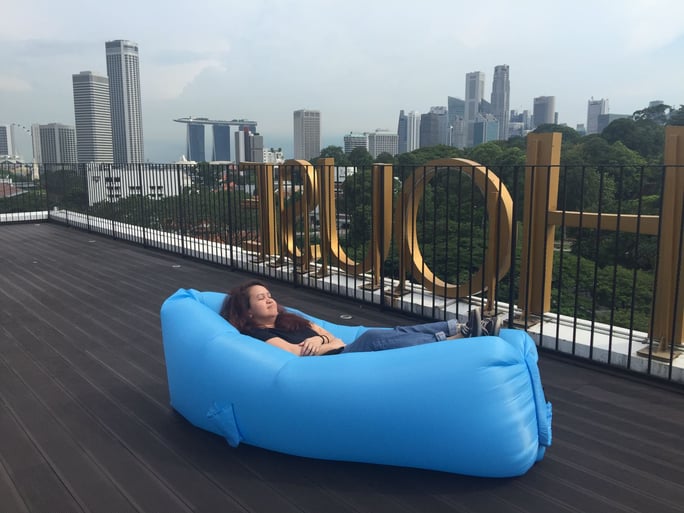 We're happy to introduce Yazmeen Indin, our Marketing Project Manager APAC. At Wings4U, Yazmeen is responsible for the coordination and management of resources in order to create content in the region up to our quality standards.

Why this role, and why Wings4U?

I have worked for ad agencies for almost 10 years and my project management role usually covered 360 end-to-end campaigns. Out of the many engagements I have done in the past, creating content with my creative team then was the most satisfying. I started looking for a role focus on content marketing after that. While working at an ad agency in Singapore, I learned about Wings4U through my client at the time. I thought Wings4u’s focus, and business model was something very fascinating and commendable. Not to mention it is a remote-first company, which was kind of a new thing before the pandemic. I can say that the opportunity to work for Wings4u came at the right time in my career.

Do you have any experiences worth raving about?

I don’t know if this is worth raving but during my 20s, I left my home and moved abroad to fulfill my dream of living in Singapore. The backstory was during my teens I was a big fan of MTV and Asia’s headquarters is in Singapore. I wanted a job there, but I was 14 then. Fast forward many years later, I packed up my bags and just went for it. Maybe it was my own version of the YOLO moment. I didn’t think much and didn’t have much either. I was young, a tad reckless but very courageous. Luckily, there is one ad agency that took a chance at me and gave me an opportunity to work for them and the rest is history including MTV.

What makes you tick? What are you passionate about?

I think being empathic goes a long way in everything that we do whether personally or professionally. Life, in general, would be less complicated if we always do our best to understand where others are coming from.

I generally like alternative rock and shoegaze. I’m currently listening to Beabadoobee. She’s such reminiscent of 90s bands like The Sundays or Mazzy Star.

Which book and movie would you recommend to everyone?

The movie genre that I like is a combination of dystopian and science fiction. The 1997 movie called Gattaca is one of my favorites of all time because the approach to theme feels like a classic movie and the narrations were carefully written to the point that it sounds very poetic. I also like this Netflix movie “Time to Hunt” which was set in a dystopian South Korea. It has lots of thrill and starred by the most talented actors of South Korean cinema. I’ll definitely recommend these 2 movies anytime.

The last book I read from cover to cover was Jimmy O. Yang’s “How to American”. If you like stories about immigrants, then this one is for you. Jimmy’s life is quite an adventure.

If you could go to dinner with anyone (alive or not), who would it be and why?

Since I’m a Star Wars fan, I would love to have dinner with George Lucas. I want to ask him what was the original story he made for Star Wars episodes VII to IX.